April 3rd is World Party Day. Also known as P Day, it is an annually celebrated unofficial holiday that aims to achieve social change and harmony by encouraging people to celebrate life by partying.

Unfuckingbelievable, right? But it really is a thing.

The holiday was inspired by the ending of the 1995 novel Flight: A Quantum Fiction Novel by Vanna Bonta, where a countdown is set to April 3, 2000 when a worldwide synchronized celebration occurs. The first P Day was held around the world in 1996.

Fun fact, the use of the word party to refer to a gathering where people have a good time dates back to 1922. Roaring Twenties indeed.

I had never heard of P Day until I was working on my 2019 content calendar. The fact that this year it falls on a Wednesday is such a vibe because Wednesday is my favourite day of the workweek. I never need an excuse to party, but learning that this day exists solely to celebrate a good time is much-welcomed information. As catch-me-like-a-rat-on-the-highway guy said “stop wasting a good time because that is where you go wrong.” Lol.

I have this weird history with partying, where I swing between “partying like it’s 1999” and, well, this:

I partied A LOT from 2007 to 2013. I turned 20 in 2007 and it is a truth universally acknowledged that the term ‘Roaring Twenties’ does not just refer to the 1920s. 2007 was also the year I joined university. As I was staying at a hostel I really let loose during my uni years, never mind that I was as broke as a duck (my mum came up with that nonsensical simile and my family and I have used it ever since). For some reason during those broke years I would go out with very little money (I remember one night my girls and I paid for a cab with coins), get hit on by sooo many guys and come back to the hostel shitfaced drunk. Now as my age goes up, my earnings are also going up but the number of guys hitting on me at the club is going down. What in the inverse proportionality is this rubbish?! Lol.

2013 was the last crazy party year I had. I was working at an agency that has an office bar and my colleagues were the most fun people I knew. So combine an office bar, youth and extroversion, and you get the full Roaring Twenties experience. We used to go out clubbing three or four times a week. Madness.

2014 to 2018 were much more toned down. 2014 and 2015 were really tough because of my mum’s deteriorating health, so much so that I became an introvert. I would come home straight from work on Friday, and unless I had an errand to run I would not leave the house till Monday morning when it was time to head to work. By the time 2016 rolled around I was sooo in love with my bed, that even if my mum’s health had improved, my vibe was still days in for the win.

I partied here and there in 2017, but not much. I came into 2017 knowing my mum might die that year (as she was given five years to live when she was diagnosed in 2012) and that did a number on my party “boner”. Sadly I was right and she died on December 13th at 1:10 a.m. It goes without saying that I was just not in the mood to party in 2018. Though I did try on certain occasions (like birthdays), but the year was so low-key that on New Year’s Eve I was more than happy to stay home alone and watch Dynasty.

Enter 2019 and I finally got my groove back. I started kicking it with these really cool kids at my new office. Q1 was the most fun I have had in a really really really long time. I think I did all my partying for 2019 in Q1, and I regret nothing. Lol. The cool kids came into my life when I was ready to start living it again. And boy did I live the hell out of Q1. For example, I never used to be a fan of Space until I went there with the cool kids. The first time we went I got home just after 5 a.m. The second time I was leaving Space well after the sun had risen and got home after 7 a.m. I decided to pause Space after that because surely I would get home at midday the next time around. Lol.

That being said, I call my colleagues cool kids because:

I love kicking it with them, but this is also me: 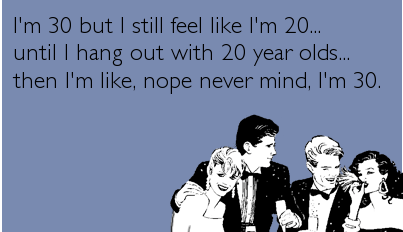 All that being said, this quarter is going to be a much more laid-back one in terms of partying. Q2 is the goal smashing quarter so I have decided to put partying on the backburner because when will I smash goals if I am busy tending to pseudo hangovers?!

I do not typically get hangovers as I stick to what I know (wine and tequila) but I do wake up so dehydrated the next day, and it is not until about 6 p.m. that evening that I start to feel like my usual self. So less partying this quarter, more “treat my goals like property, collect them like Monopoly.”

Quick aside, that line is from Ariana Grande and Victoria Monét’s new single Monopoly and I love how Ari’s releases nowadays are so relevant to my current vibe. I am especially geeking out that she released Monopoly on April 1st, aka Q2’s start date. I tend to dig such coincidences as I take them as signs from the universe that I am on the right track.

In conclusion, whatever you do and whoever you party with today, remember that you need no excuse to celebrate life this World Party Day, and every other day. As my future bae Passenger says:

One thought on “World Party Day”