Edward Christopher Sheeran. Ed. Teddy. Ginger Jesus (he hates that nickname BTW). I saw him live in concert on 27th March 2019 in Cape Town. It was his first time there. Mine too! Twinsies!! (I will do my best not to come off stalker-ish but no promises).

The first time I heard Ed Sheeran’s voice was in The Vampire Diaries S03E14; the scene where Damon and Elena did that ka-dance to Give Me Love at The Mikaelson’s Ball while Stefan stared with kiwaru. I’ll never know if it was the chemistry in the scene that made the song punch me in the feels or Ed’s voice that turned me on to team Delena. Who cares?! I was hooked! I replayed that scene and Googled the lyrics (yes it was 2012 but I wasn’t really conversant with Shazam). That was my intro to the artist I know for a fact I will make my kids listen to, because I said so.

So I got* the song and played it over and over till I knew it by heart but I was still young and foolish so I didn’t fully appreciate the whole song. I cut out the hook or whatever you call that part of the song with the “m-my my, m-my my, m-my my, give me love, lover” … you know the part I mean. You should see me jamming to it now!

I digress. Ed made it on to Rick Dees and Dees is legit so I became a fan of his singles from +. Then out came X in 2014 with the first two singles being very upbeat tempo. Not the Ed I was used to but once you listen to the songs, you can’t not Sing along (the drama around Don’t helped make it a chuuunnee). Then he released Thinking Out Loud and it’s safe to say he buried the lead. It was at this point I figured I can’t keep waiting for these singles, I need to listen to the full album myself. Back then we were still calling {multiply} {ex}.

I don’t want to spell out every song and how it made me feel but the outcome was just short of an obsession. It’s ineffable. Thinking Out Loud solidified his pop star status but there are bigger gems in that album. I started looking for his interviews and live performances (thanks YouTube) and I would just watch for hours learning all sorts of random facts about him. Some of my favourite are:

Watch a couple of his interviews and see if you don’t turn into a Sheerio. He’s funny, shy, relatable, hardworking, great with his fans and down to earth.

Fun fact, at the beginning of his set he tells the audience that everything they will hear is played live, no recordings, no behind the curtain stuff. Strange thing to say yah? It’s because after a show he did in Glastonbury a couple of “fans” accused him of having a backing track. He’s that good! The loop station is magic but it doesn’t take away from the show, because it’s just something he keeps stepping on. You wouldn’t even notice it if you’re not keen. Not to say he doesn’t have an amazing team with him, they are a cool crew.

His worry when he started to play bigger venues, which is mainly why solo performers don’t do huge venues, especially with the intimate songs, is how to keep the crowd engaged. But he sold out Wembley Stadium (capacity 80,000!!) THREE NIGHTS! They said it couldn’t be done. He was only supposed to do one show but when shooting the promo, he held up 3 fingers and that was that. At this point I’ll just say go watch Jumpers for Goalposts (JFG).

At the height of his fame when he became a household name, this bugger decided to take a year off and starve us of his presence. Needless to say I was pretty upset cause I’d gotten used to hanging out with him on Snapchat. But he was having a burnout and needed the time and I was sure he’d come back with a gaddamn bang. I played + and X a lot that year.

Fast forward to Jan 2017 and he started to prepare us for ÷. I wasn’t ready!! I inhaled that album. I remember thinking, especially after watching JFG for the third time, it must be epic to see this dude live. But I honestly never considered it a potential reality.

25 June, 2018 Ed Sheeran posted Divide Tour dates for South Africa. I was at bored at work, decided to check the Gram, see what’s new (since 10 mins ago 😐 ) and I get a notification:

Stare at screen in confusion.

My boss came to ask for something, IDK what. He had to repeat himself.

Ed is coming to Africa! This is as close as it’s ever gonna get!

I was legit in a panic. My cousins start sharing the image. “Are we going?” And I just thought, it’s now or never. Yaani there wasn’t even a debate in my mind with my usual frugal self. I was going to see Teddy live. I usually need some persuasion to do stuff but I’m still impressed at how fast my brain made that decision. Logistics kando, it was happening come hell or high water. It’s Ed yoh! Literally anybody else and I could have potentially talked myself out of it, but not Ed M.F. Sheeran. I mean, yes I appreciate life happens, but where I was, especially the way I was at my desk bored out of my mind just few moments earlier, this is what I was working for; to be able to do something like this. And it’s not like Ed gave us much time to think. The tickets were to go on sale in 3 days.

Securing those tickets was such a tense experience. The Computicket website kept crashing. My cousins and I were all refreshing our browsers like mad! I had even instructed my colleague to keep my boss away from me because I didn’t need any more pressure!!

Anyway, after what seemed like 7 business days (it was 2hrs 21 mins) we got the tickets. Front Standing Zone (FSZ). Right at Ed’s feet. We wanted the seating area but even after standing for over 5 hours, I regret nothing. That was the best option. I smiled that entire afternoon at my desk, earphones on, Divide on shuffle. I watched JFG again that night. Then in July he announced his cousin had done a documentary called Songwriter that basically shows how Divide came to life. You know I got* it soon as it was released! Fun fact, Ed isn’t extremely opposed to file sharing because as he said it’s how his music got around before he was signed by a label such that when he released +, he already had a built-in audience.

Every time Ed posted that pic of the crowd at the end of a show, I saw myself in the crowd. I still couldn’t believe I was going to attend his show. One day when I was looking for accommodation options, my colleague saw and this was the conversation:

Him: When are you going?

Me: March next year. (This conversation was in August)

Me: I’m going for an Ed Sheeran concert and it’s next year but we already have the tickets.

Him: That’s far away. Will he still be relevant?

Another interesting conversation I had about Ed was with my mum. She wanted to see a photo of this artist I was so excited about. I really did try to find a flattering pic, and I probably have love goggles because my mum was like “kwani how old is he? 50 something?”

I caught a feeling. But my mum is low key savage.

I think I started really thinking about Cape Town two months before the trip. Before that I was only interested in the concert, where we could pick our tickets, what to expect, what to wear, which merch I’d buy, whether I should get red braids and be ginger for the concert or get his album art on my nails. I would go to Ed’s website occasionally to just make sure the dates are still up.

When we got to Cape Town my primary objective was getting those tickets in hand. For all the anxiety I had thanks to the lengthy rules on Computicket, it was relatively easy to get those tickets, and to enter the venue.

That morning was probably the first time in a long time (dare I say ever) that I woke up with an instant smile. I am not a morning person. “Me nem nesa” (It is known). I put +, X and ÷ on shuffle and we all danced as we pre-gamed. After lunch we power walked to the stadium. FSZ gates opened at 4.00pm. It was already 4.15. We were late! I’m always late but I was just short of sprinting and since I had the tickets everyone else had to keep up. I actually left them at some point, lol. I just left the guard who was checking the tickets with the other three and vaguely pointed behind me like, they are coming!

Let me just say, I was taken aback when I saw the stage set up. We’ve all seen it in photos and videos but wow! Just wow! I was on cloud nine. I couldn’t take enough of it in. I kept zoning out of conversations just staring at it.

The local opening act was Shekinah, then Passenger, and they did a good job but I spent most of that time trying to catch a glimpse backstage of Ed and his crew that I knew relatively well from JFG and Songwriter.

Right before Ed came on stage I told my cousins “I’m about to lose my small Luhya mind”. I did. It’s probably a good thing Bae didn’t come for the trip because no one needs to see their S.O scream like that for someone else.  He started his set with Castle on the Hill. The first song I heard and instantly loved from Divide. I teared up. He also played Tenerife Sea which is one of my future wedding songs. For almost every song I’d scream along for the first verse, record for future nostalgia then silently mouth the words as I stared at Ginger Jesus. You know how this generation says “Pics or it didn’t happen”? I was recording just so that when I wake up the next morning I could be sure it wasn’t a dream.

His performance was electric and intimate, so powerful and still personal. Just him, his guitar and the loop station. But the sound from that stage, I see why people thought there was a full-on band backstage. The visuals on the screens were amazingly done. Ed says he sees all his songs in colour and you can tell. 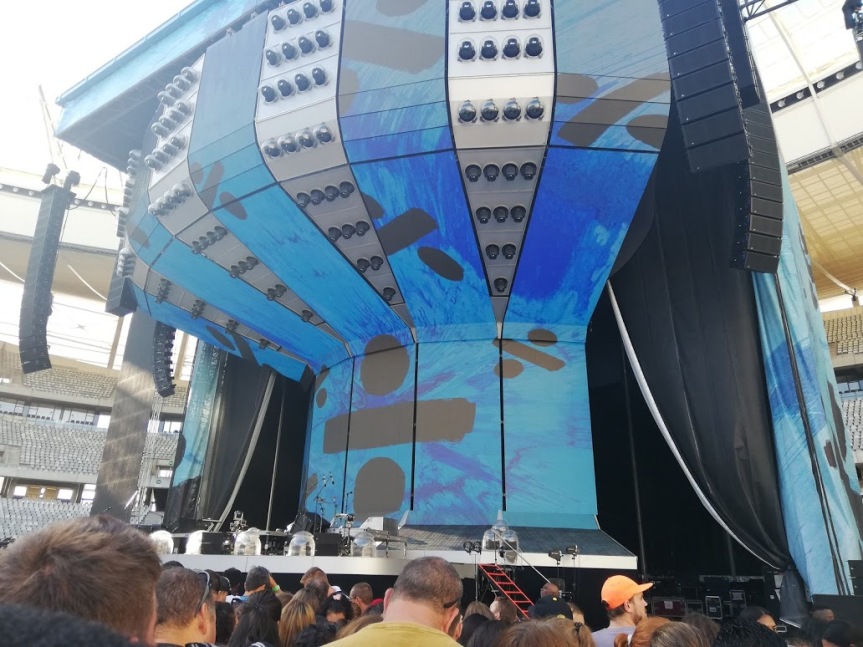 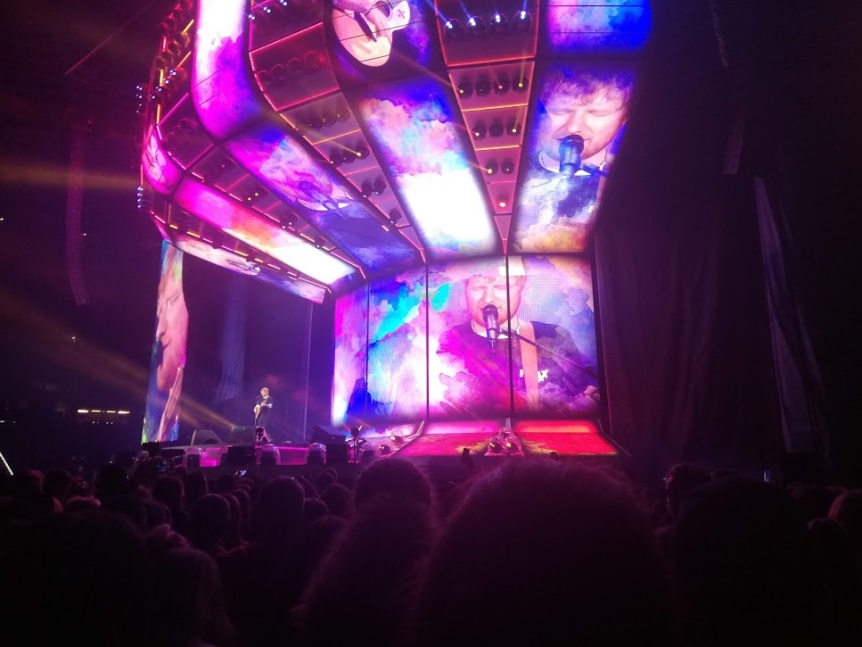 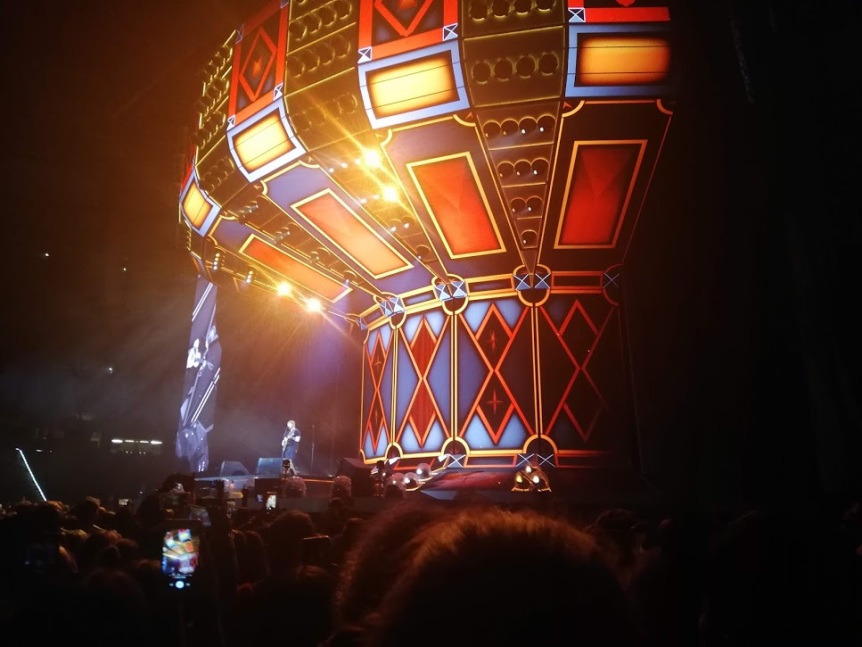 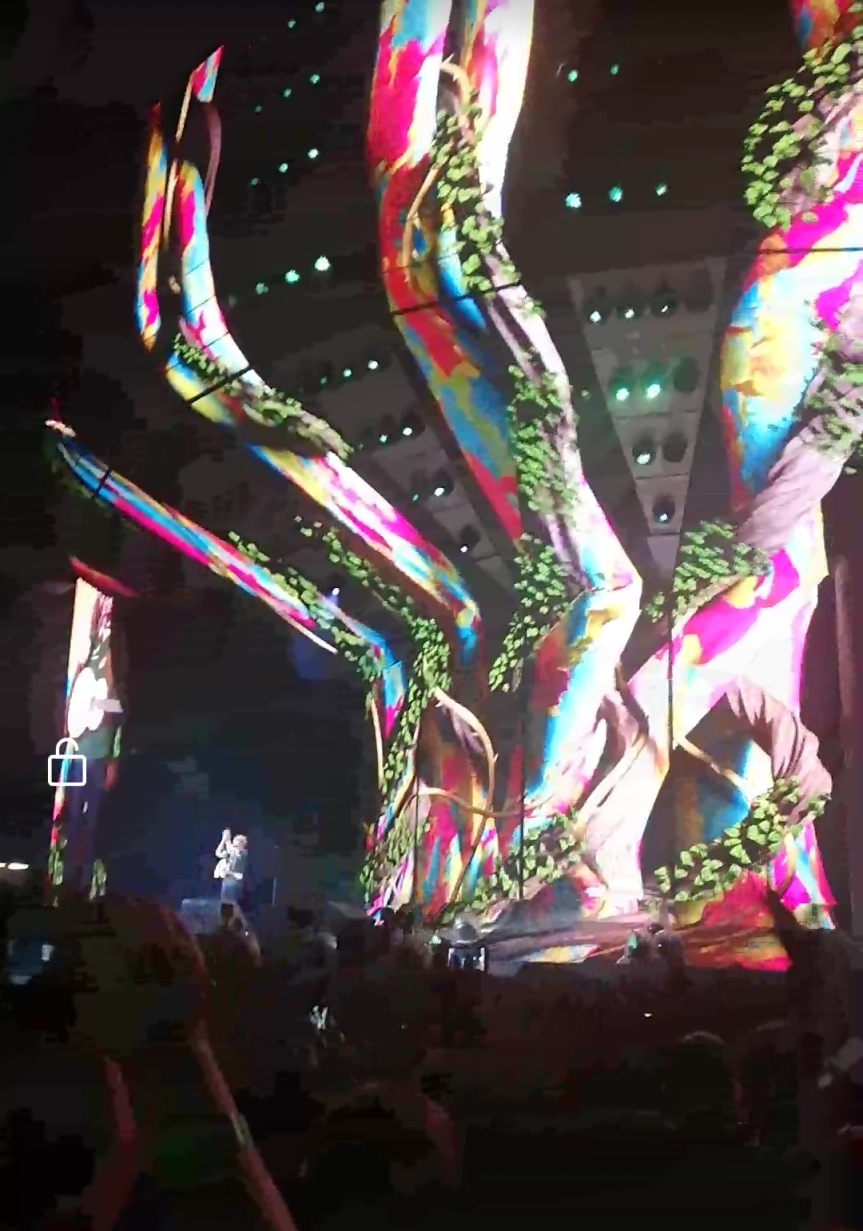 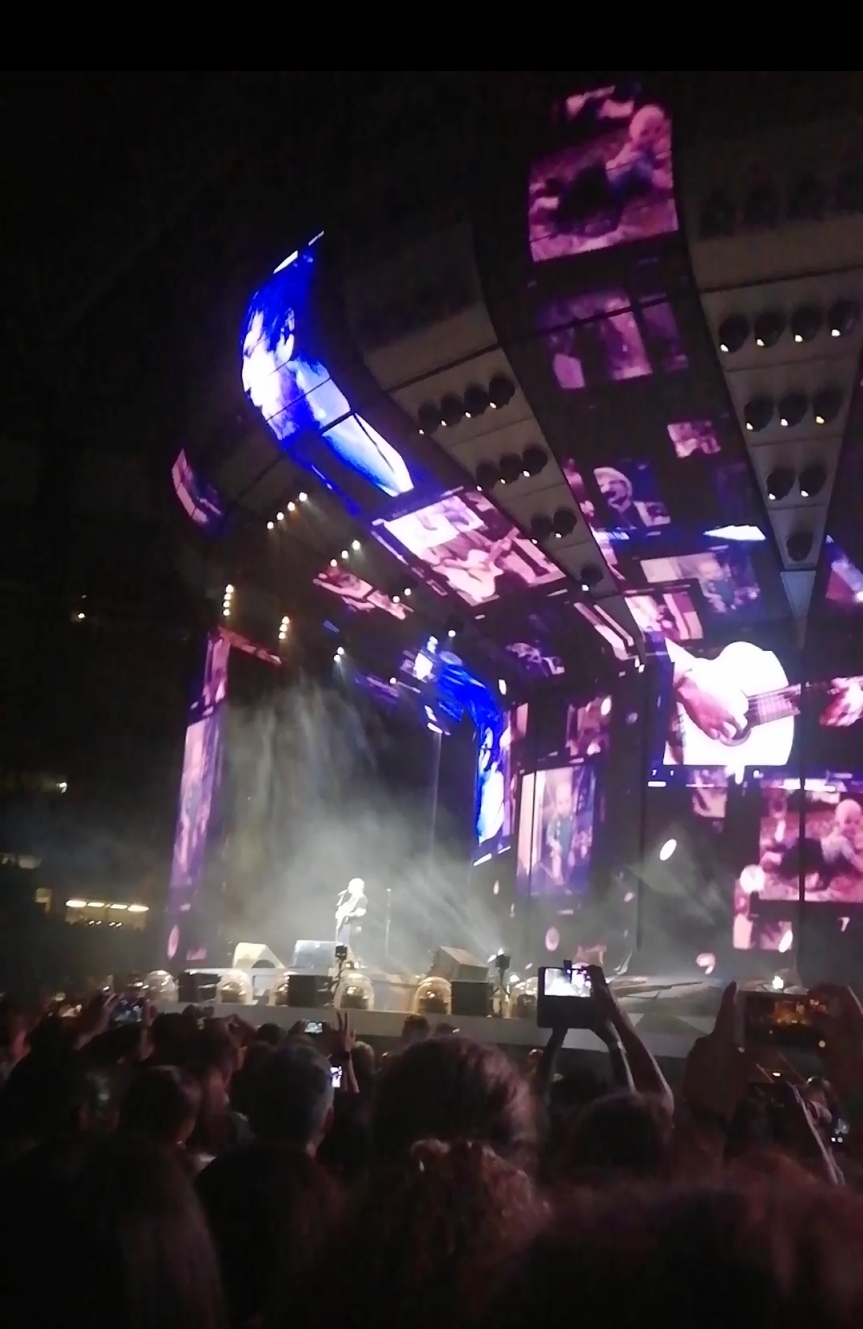 The first hour of the show he said, “It’s OK if you don’t know the words, you can make them up, just SING”. Second hour he was like, “This is the sing along portion of the show if you don’t know the words, you’re at the wrong show!” Lol! But in all honesty there was this really tall girl in front of me who only sang along to Shape of You. Msscchhheeewwww!!! I sang/screamed my heart out to everything.