Of all the things I was confident would happen to/for me in 2020, identifying with this new definition of edging was not one of them.

Last year on the blog I had a feature called The Alphabet Series that you can check out here if you are new to the blog. T was for Therapy, but when I was working on my content calendar in Q4 2018 the initial plan was to have T Is For Tears as a The Grief Diaries post. A decision motivated, in part, by a text I sent to my BFF a few months after my mum died on December 13, 2017.

In the year following my mum’s death I was plagued by dreams about her. At first (just after she died) I looked forward to the dreams because I would get to talk to my mum and reassure her that all will be well. The dreams felt like the final face-to-face conversation we never got the chance to have. But it was not long before my dreams would take either one of two forms. I would either dream that my mum is still alive and for a few disconcerting seconds when I woke up I was unaware that she is dead. Or I would dream that my mum is alive but I know she does not have much time left, so when she dies again in my dream I would cry as if it were happening for the first time.

The dreams were fine at the beginning but with time they became distressing and felt akin to emotional torture. Just imagine starting almost every day realising that, contrary to what you woke up knowing, your mum is dead. That is some hard shit! Eventually I confided in my BFF that reliving over and over the fact that my mum is dead first thing in the morning was wearing me down and that is when I came up with T Is For Tears.

In 2014 I read Yesterday, I Cried by Iyanla Vanzant. In the book Ms. Vanzant educates us on different types of tears as each type of tear emanates from a specific place in the body and has certain distinct characteristics. The following italicised passages are lifted directly from the book:

Angry tears spill forth from the outside corner of the eye, making them easier to wipe away as they come at unexpected moments and inappropriate times. They originate in the ego — the part of our being that presents to the world who we think we are. Angry tears create heat and stiffness in the body, because when we are angry, we usually don’t know how to express what we feel. We definitely don’t want anyone to know when we are angry, because anger is not acceptable or polite. Rather than display anger, we hold back, and the tears rage forth, shattering our self-image. More important, angry tears reveal to those around us our vulnerabilities.

Sad tears spill forth from the inside corner of the eye, finding their way across our nose, cheeks, and lips. For some reason we always lick sad tears. We know that they are salty, and the things that bring them forth are usually the bitter experiences in life. Sad tears come from the heart. They usually bring a bending of the shoulders and a drooping of the head.

Frightened tears take up the entire eye, clouding our vision, as fear will do. When we are frightened, we cannot see or think. Frightened tears are usually big tears that well up in the eye. They spill over the whole face. Frightened tears come from the soles of the feet. They shoot through the body and create trembling or shaking.

Combination tears are the worst tears of all. They are filled with anger and sadness, with fear and shame. They have a devastating effect on the body, bringing the stiffness of anger, the drooping of sadness, the trembling of fear, and the bending of shame. They make you cold when you are hot. They make you tremble when you are trying to keep still. Most of all, they make you nauseated.

I am not a crier. Though given that I am permanently edging nowadays, I think it is more accurate to say I was not a crier. I usually have a good cry twice or thrice a year, but my tears are mostly reserved for sad movies and books, not for myself. 2014 and 2015 are the exceptions to this as those were the hardest years of my life and I cried more in those two years than I had in all my previous years combined.

And then my mum died and life as I know it broke. Unsurprisingly 2018 was the worst year of my life, but on the flip side 2019 was the best year of my life and I did not cry even once that year. That was the year I got my ‘ntltc’ tattoo on my last evening as a 31 year old. 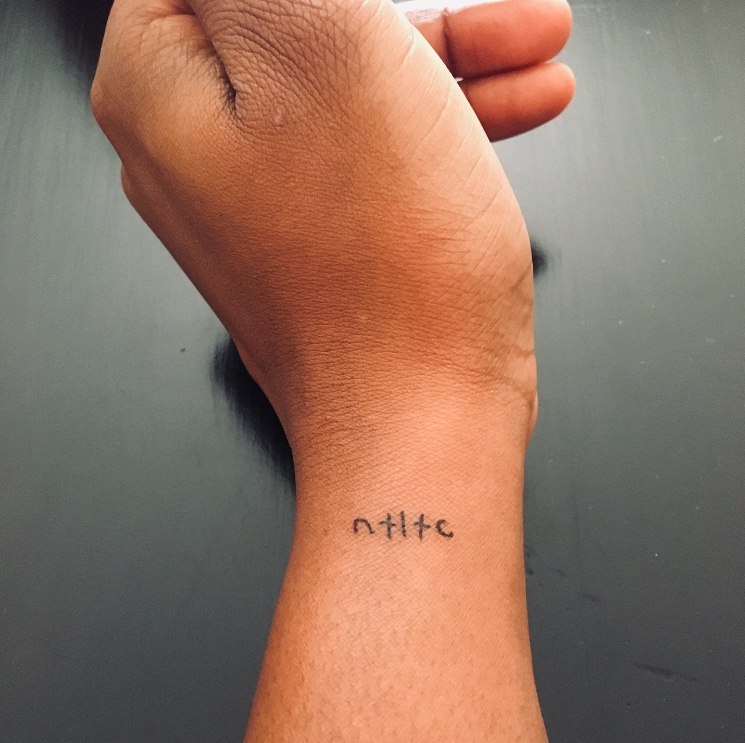 The tatt was inspired by Ariana Grande’s no tears left to cry as the song is about finding the strength to carry on after hardship. I wrote all about it in N Is For ntltc that you can read here so that I do not have to repeat myself. The ntltc post will also provide some background information on today’s post which, as you can tell from the title, is me taking back my declaration that I have no tears left to cry.

Enter 2020 and I have cried more this year than the last two years combined, with the majority of those tears being shed in February and March. We are working with my therapist to figure out why I am crying/on the verge of tears so much nowadays and we have a few theories that I will share once I am ready. We are also working on recalibrating my viewpoint on crying as I have always regarded crying as a sign of weakness yet is actually a sign of strength. But my last therapy session was on March 12, meaning I have not seen my therapist in almost seven weeks 😐 I have an appointment with her for tomorrow though as I have not been in a good place of late and I want to get a session in before Mental Health Awareness Month in May.

In the early stages of my relationship I told my boyfriend that sometimes I have dreams about my mum that result in me crying in my sleep. At the beginning of February I had a terrible sore throat that hindered my breathing every so often at night. One night we were sleeping and my breath caught in my throat so I let out a sound that my boyfriend mistook for a cry. How did he start wiping away tears that did not exist as he murmured sounds to comfort me in his sleep?! The next day when I brought it up he had no recollection whatsoever of wiping away my imaginary tears, and that is why I say all the time that my boyfriend is the sweetest thing. He will wipe away what he believes are my tears even when he is asleep and hearing his own things … I could not be more grateful for him even if I tried.

This post should have had more … depth, but as mentioned I am just not in a good place right now.

I am currently oscillating between Truly Difficult and Black Pit of Chaos and Despair 😐 In addition to the pandemic doing a number on my mental health, Mother’s Day is coming up and that is a major trigger for me. It will be my third motherless Mother’s Day and I am already over it!!! So I will pick up the theme of this post another day, but for now I will give myself grace and take pride the fact that I managed to put up a post in the first place.