L was (unsurprisingly) initially for Leo but after Ari dropped that gem L is now for Lyrics. break up with your girlfriend, i’m bored slapped so hard mpaka I put up my first ever Instagram story the same day the song was released.

It is quite obvious by now that I like words, but more than that I like how words are strung together to create sentences, which is where my love for lyrics comes from. The description for my Lyrics That Relate category on the blog reads:

Fewer things heal the soul more than music. Lyrics have the power to articulately put emotions into words, providing a much needed catharsis. This is me highlighting lyrics that have made an impact during various points in my life.

The point of all that is I am a Song of the Year kind of girl. While I love and appreciate bops and bangers, it is song lyrics that stay with me.

I simply cannot resist a well-written lyric so for this post I will share 31 (duh!) lyrics that I love for one reason or another. The lyrics do not really need any context but for some I will give a little backstory/explanation as to why I love them, because it is my blog and I can write what I want. Lol.

That lyric 100% gives me cheap thrills because I am Luhya. Lol.

Sia has such a special place in my heart and I plan to write an entire blog post dedicated to her because the singles released from 1000 Forms of Fear were a major soundtrack to my life in 2014 & 2015 when my mum was unwell. Fuck cancer!

All along it was a fever
A cold-sweat hot-headed believer
I threw my hands in the air, said, “Show me something”
He said, “If you dare, come a little closer”

Yes I like the Jo Bros. I never paid much attention to them earlier but I was aware of them and their music. While I thought that Nick was the hottest Jo Bro, I just could not get down with Joe’s eyebrows. I guess they were just really ahead of the time because bushy eyebrows are the shit now.

I love that lyric because it describes how it is for me when I am falling for someone, especially that bit about breaking my typical rules.

Also, can I just talk about the music video for a minute. Yo! I bet it will get an MTV VMA Video of the Year nomination (yes I still watch the VMAs). The #JSisters nailed it!! ESPECIALLY Sophie Turner!

Maybe I am the only one but after watching the Sucker music video I had a feeling she would kill it as Sansa Stark in the final season of GOT, and damn straight she did the damn thing!

Higher than a motherfucker dreaming of you as my lover

I love to play this as I am smoking up and fantasising (if you know what I mean) about my crush(es).

I just took a DNA test, turns out I’m 100% that bitch
Even when I’m crying crazy
Yeah, I got boy problems, that’s the human in me
Bling bling, then I solve ’em, that’s the goddess in me
You coulda had a bad bitch, non-committal
Help you with your career just a little
You’re ‘posed to hold me down, but you’re holding me back
And that’s the sound of me not calling you back

I first heard this when I watched Someone Great after it was mentioned by Taylor Swift on Ellen and I immediately Shazamd it. I mean just look at Gina Rodriguez go all the way off! Ladies I dare you to play this song and not feel like you are, indeed, 100% that bitch. I double dare ya.

The original booty call song. Or at least to me it is. I am guessing there are other booty call songs that came before it but this is the “earliest” one I know offhand.

I’m fuckin’ with ya cutie q
What’s your dick like homie?
What are you into?

This lyric reminds me of a “rule” a friend came up with years ago: Lazima ukague. Ladies, you must inspect what your #MCM is working with before you go home with him. Imagine getting home and finding out that this is the situation:

That is some shit!! And whether you choose to persevere (ew!) or offend (awkward!), neither option is in any way appealing.

A thousand miles seems pretty far
But they’ve got planes and trains and cars
I’d walk to you if I had no other way
Our friends would all make fun of us
And we’ll just laugh along because we know
That none of them have felt this way
Delilah, I can promise you
That by the time we get through
The world will never ever be the same
And you’re to blame

When this song came out I wanted to be Delilah so bad. Lol.

And the tears come streaming down your face
When you lose something you can’t replace
When you love someone, but it goes to waste
Could it be worse?
Lights will guide you home
And ignite your bones
And I will try to fix you

I am so tempted to include the lyrics for the whole song but I will resist. Just trust me that the song is 4 minutes 21 seconds of perfection. I played it all the time after my first major heartbreak because: 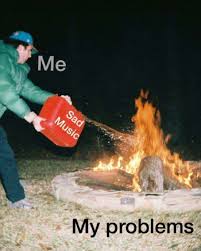 One day I mentioned it and someone told me that while the song may be my life’s soundtrack at the moment, one day this will be me:

And of course she was right.

Who the fuck do you think I am?
You ain’t married to no average bitch boy
You can watch my fat ass twist boy
As I bounce to the next dick boy
And keep your money, I’ve got my own

I have so many insecurities about how I look, but I am embracing the fact that I cannot change them and this face and body are all I will ever get so I might as well work it! Also, drink and I get all fired up. Lol.

Spark up, buzz cut
I got my tongue between your teeth
Go slow, no, no, go fast
You like it just as much as me

I love this song and I love the video even more. It was my first introduction to Troye Sivan and I think he is just so damn sexy! Yes I know he is gay but the boy can absolutely gerrit.

Hate me in ways
Yeah, ways hard to swallow
Hate me so you can finally see what’s good for you

22. Lost in the Fire – Gesaffelstein & The Weeknd

This is my blog anthem.

Fuck being friends
I got your heart in my hand and your dick in the other
You ain’t scared to fuck, but you scared of being lovers
Why is that, huh?
My pussy beat better than my heart do
Boy, please, you ain’t blind, you’re a smart dude
So why you pussy-footin’ on this part two?

Ladies if you do not know this bop, check it out right here (avatar eye roll on 100!) because it is the energy you never knew you needed. Yo welcome!

‘Cause we all just wanna be big rockstars
And live in hilltop houses driving fifteen cars
The girls come easy and the drugs come cheap
We’ll all stay skinny ’cause we just won’t eat
And we’ll hang out in the coolest bars
In the VIP with the movie stars
Every good gold digger’s gonna wind up there
Every Playboy Bunny with her bleached blond hair
And we’ll hide out in the private rooms
With the latest dictionary and today’s who’s who
They’ll get you anything with that evil smile
Everybody’s got a drug dealer on speed dial
Hey, hey, I wanna be a rockst

Feel like I’m always apologizing for feeling
Like I’m out of my mind when I’m doing just fine
And my exes all say that I’m hard to deal with
And I admit, it’s true

My church offers no absolutes
She tells me, “Worship in the bedroom”
The only heaven I’ll be sent to
Is when I’m alone with you

She said, “I heard you got a main chic, a mistress and some hoes
You be up to no good and everybody knows
My home girls tried to warn me, they tried to let me know
But what you got, I need a lot so I can’t let you go”

She said, “I can’t get enough of what you got, good god you hit the spot
Tried to let go but I just could not, so don’t you stop, I need that”

Enyewe being dickmatized can fuck up your world!

Saw you there and I thought
Oh my God, look at that face
You look like my next mistake

2 thoughts on “L Is For Lyrics”