The minute I heard WAP by Cardi B ft. Megan Thee Stallion I just KNEW I had to write about it. I fell in love the song at first listen and I am nowhere near the only one. The sex-positive anthem made history when it debuted at number 1 on the Billboard Hot 100 and was streamed 93 million times in its first week. Not only that, it is also the first female rap collaboration in history to debut at number 1 on the Hot 100.

I love everything about WAP. From the intro (the weekend after WAP debuted I could not get “there’s some whores in this house” out of my head), to Cardi and Megan owning the fuck out of their sexuality in the lyrics, to the epic music video and everything in between.

I have sooo much to say about this song so to break everything down as clearly as possible I will dissect today’s post into three sections.

Where my certified freaks at? Lol! But, like, as far as opening lyrics go that is a pretty epic one! I definitely identify as a certified freak so whenever I sing that lyric I feel so. damn. smug. my face probably looks like this:

Lol! But yassss “wet ass pussy make that pullout game weak” is such a vibe!!

Give me everything you got for this wet ass pussy

There are a number of ways to interpret ‘everything you got’ and to each his own but for me I choose to interpret it sexually. As in, fuck me with everything you got coz this is prime pussy thank you very much. And lemme tell you guys my man really does give me everything he has got for this wet ass pussy. When I say I am having some major fire flames sex I am not exaggerating even a little bit.

Too often after sex my man is so fucking finished he just blacks the fuck out mpaka he snores. Me on the other hand I am soaring from the multiple orgasms I feel like I can fly. Lol. For real though.

I do a kegel when he’s inside

Ladies if you do not know what a kegel is I suggest you read this right the fuck now because doing kegels while the dick is inside you will change your sex game. Sweardown! First and foremost it feels good for YOU! And the way it feels good for you is the same way it downright finishes your man. It is an assassin’s move so if you have never tried out kegels during sex I suggest you do so ASAP and watch a nigga get pussymatized.

Which reminds me of a tweet I saw some time back: 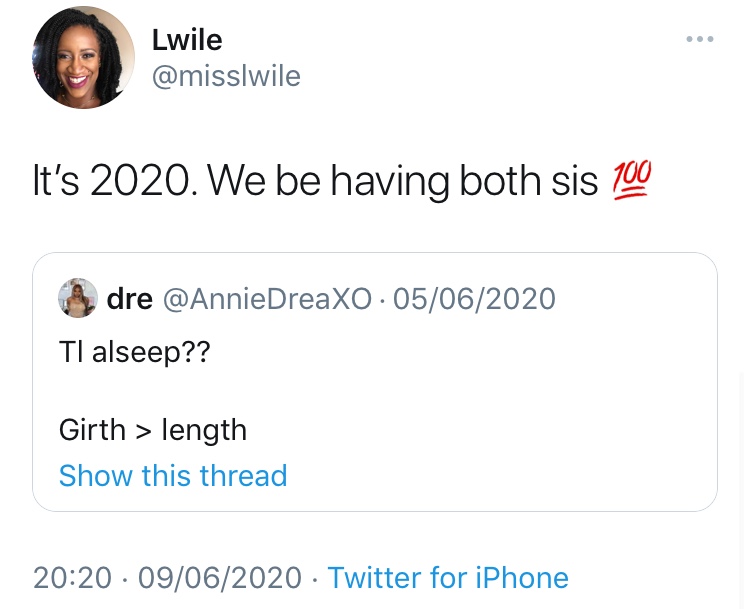 I mean, really, why choose when you can have it all.

I don’t cook, I don’t clean
But let me tell you how I got this ring

Society tends to go on and on about “wife material” and a common characteristic, both in and out of the African society, of what wife material entails is that the woman must cook and clean. How many times have you seen a woman post a pic of her gorgeous, long-ass nails on social media and one of the questions she is immediately asked is how does she do housework with those nails.

I am not saying you should not cook and clean for your man should you want to do so. But that’s just it, it should be your choice as a woman. Society should not lord that expectation over your head and deem you unsuitable “wife material” because you would rather pay someone else to do all of the cooking and cleaning.

So here’s to Cardi for saying fuck off to that archaic expectation of the woman in these modern times.

Ask for a car while you ride that dick

Whew! First of all:

Second, when I heard the lyric “pay my tuition just to kiss me on this wet ass pussy” there was something about it that just sounded so authentic. So I Googled and learnt that after taking time off school Megan is currently taking online courses in health administration part-time at Texas Southern University. Now I am pretty confident that someone really did pay Megan’s tuition just to kiss her on her wet ass pussy.

I don’t wanna spit, I wanna gulp
I wanna gag, I wanna choke
I want you to touch that little dangly dang that swang in the back of my throat

“I want you to touch that little dangly dang that swang in the back of my throat” is probably my favourite lyric in the entire song. That whole bit is sooo fucking epic the first time I heard it I went:

I’mma keep it real though and say that even if I sing that bit loud AF, kwa ground vitu ni different. I wanna spit, I do not wanna gulp, I do not wanna gag, I do not wanna choke, and I definitely do not want my man to touch that little dangly dang that swang in the back of my throat. Lol. Frfr though.

For me the only position I can COMFORTABLY give my man some bomb ass head is if he is standing and I am seated. Otherwise it is just a whole lot of gulping and gagging and choking since my boyfriend has both girth and length. Because like I said it’s 2020 and we be having both. Lol. For real though. On that note if anyone has tips on how to give a big dick nigga some bomb ass head in various positions without all of the gulping and gagging and choking, please DM me on Twitter or Instagram. Kthxbye.

Switch my wig make him feel like he cheating

This is the second lyric that has ever made me want to own a wig so bad. The first is in 7 Rings when Ari says “You like my hair? Gee thanks, just bought it.”

If he ate my ass he’s a bottom feeder

Having your ass eaten feels soooo good so bottom feeders for the motherfucking win!!!!

If he fuck me and asks whose is it?
When I ride the dick I’mma spell my name

This video is B.A.N.A.N.A.S!!! I watched it the same day it premiered and fell in love HARD at first view. Cardi and Megan are two sexy AF women and they are not shy about letting the world know. How can you not love that!?

WAP has riled up a shitload of people because for some reason the notion of women owning their sexuality is one that is still baffling IN THE 21st CENTURY. I mean, our very own Nonini had this to say:

First of all, whew chilllleee the hypocrisy!! That comment is pretty weak coming from Nonini as there are a number of songs in his discography that are centred on sex. Methinks he has a garden snake and not a king cobra which is why he caught a feelings. Lol. My BFF called him and his hypocrisy out when she responded: 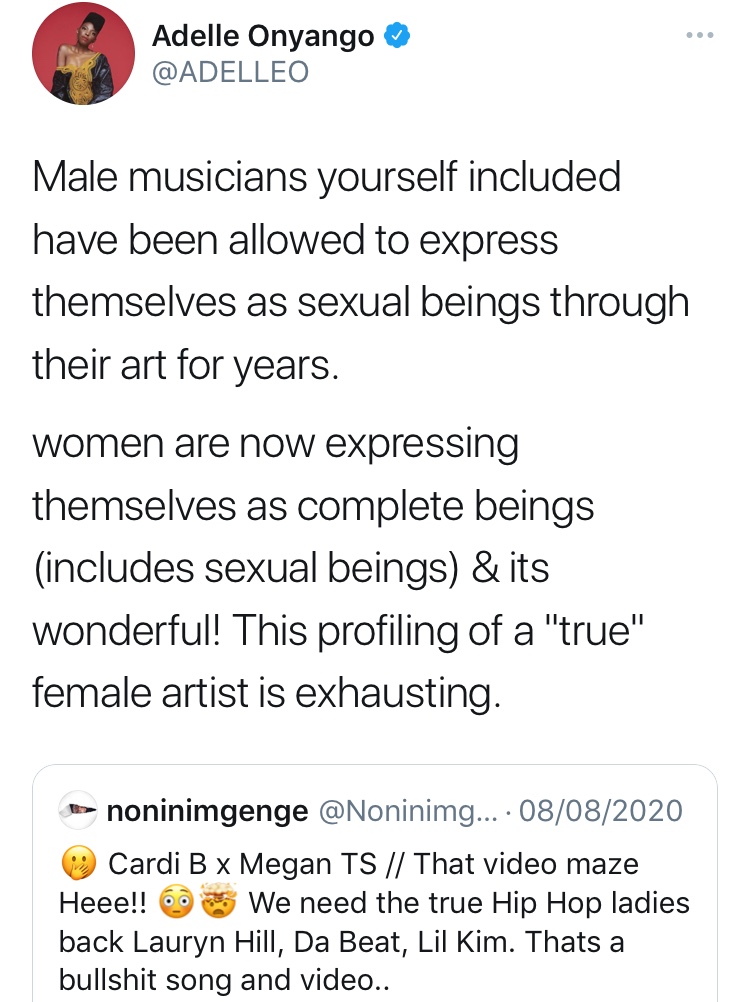 Newsflash: Women like love sex. I mean we REALLY LOVE sex!!!! But for some reason society expects women to only love sex privately because when women talk about how much we love sex, society is so quick to call us hoes. For years the media has presented the pleasures of sex from a male-focused gaze such that now when women are openly owning their sexuality and bragging about their sexual prowess it is jarring. 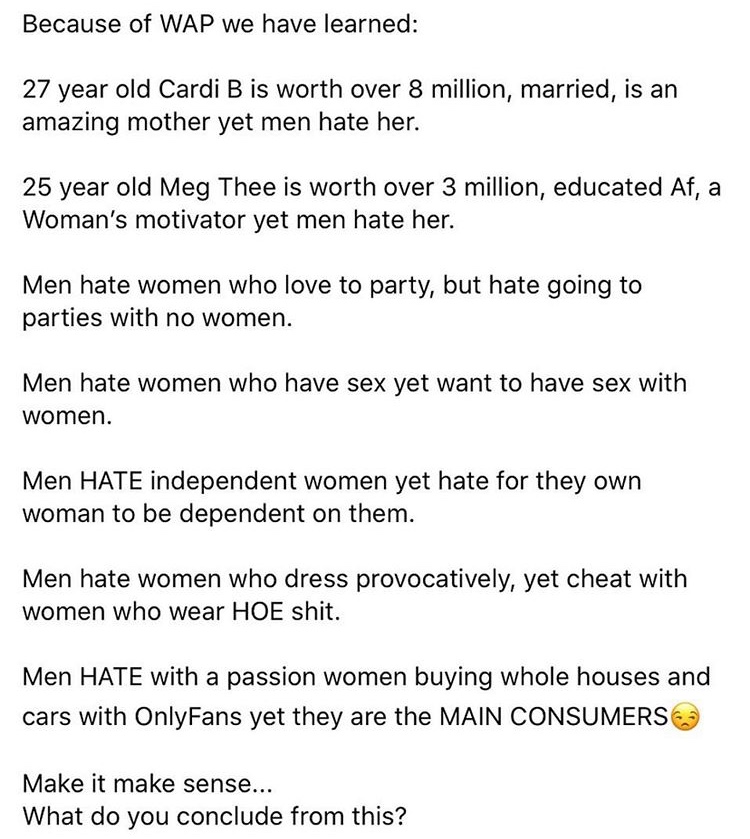 The whole uproar about WAP being “too much” reminded me of when super troll Piers Morgan came for Little Mix and Ariana in 2018 for ~gasp~ using their sexuality to sell albums. Ari put him in her place when she responded:

I use my talent AND my sexuality all the time because I choose to. Women can be sexual AND talented. Naked and dignified. It’s OUR choice.

Feedback I often get on my Sex And The City posts is how brave I am for owning myself and writing so openly about sex. Yes I am brave but more than that I have always lived my life in a way that feels authentic to me. Sometimes that authenticity is at odds with what society deems appropriate, more so for me as a woman. And I am absolutely okay with that. From the minute I heard the term “rebel with a cause” I have identified as one because while I am mostly a rule follower, I only do so when the rules make sense. If not then bye, Felicia. I refuse to let society limit me, nor do I need its permission to do what makes me happy. Which is why I STAN Cardi and Megan showing reminding women that it is perfectly okay to own your sexuality and brag about your sexual prowess.

Random musings as I conclude:

I hope you have enjoyed my blogiversary post dear reader as I had a lot of fun writing it. Once again thank you to each and every person who has read my work over the last two years. Here’s to fucking shit up even more in year three of Lwile the Leo.

Leave a Reply to Lwile the Leo Cancel reply