I LOVE and LIVE FOR Leo season and my birthday. I mean, this blog is called Lwile the Leo so it should surprise no one that I am unapologetically Leo! And even though Leo season this year will be indoors because of the pandemic, I am still excited about it.

That experience, or lack thereof, was enough to keep me off wanking for a while and I did not try it again for many years. I must have been in university when I next tried to wank, but once again it did not turn me on even a little bit. I tried it again a few more times, but each and every time the result was the same. Ironically, my first ever orgasm was a clitoral orgasm c/o the fingers of the man who broke my virginity, so it was hard for me to understand why I could not turn myself on using only my fingers. The only exception was when I would wank as part of foreplay, not because my fingers were suddenly working their magic, but because it would turn me on to see my sex partner so turned on by me touching myself. Kwanza when you both masturbate while watching each other …

In my mid to late twenties I would look up vibrators online and enquire about costs albeit half-heartedly, because for some reason I could not rouse enough interest to actually make a purchase. That all changed last year because if you read my Sex And The City category, you know that in 2019 I was disappointed by fuckboy after fuckboy. And it is not like 2018 was any better because I only had sex FOUR!!!! times that year. Four! I had a smoke-session convo about that measly number last year with two babes I met at a party during Leo season that went something like this:

Girl B: *hits blunt* But why? Were you going through something?

Me: Actually yes, my mum died in December 2017 … wow, I never connected those dots until now.

Girl B: See *hits blunt* this shit is deep. It’s just helped you realise some shit

I call him The BBC (Big Black Cock) but he also goes by T’Challa because the Black Panther vibes are real!

Quick one, is your reaction to my vibe more of:

Sweardown the last time I had such a staggering clitoral orgasm was the first time I had sex. When I finally came down from the orgasm, I was ready for some penetration and started off with some very necessary lube because my vibe is HUGE! I slowly slid the vibe into me, inch by inch until it was all in, and then started experimenting with the seven different speed settings.

Tried out the vibe today for the first time. I’ve named it The BBC 😃

I am not kidding guys! I came so hard mpaka I was screaming. Lol. For real though. I had never experienced anything like that so I needed to know if it was a fluke or nah so round two mara that that. Spoiler alert: it was no fluke. I came and came and came until I squirted. I then sent this text to The Vibrating Lawyer:

I mean, just see for yourself:

After that whenever I was in the mood I would smoke a blunt, have a glass or two of wine and wank away, with my music playing via earphones. With time I learnt that when I am about to squirt it is best to finish off in the shower. That way there is no need to mop up after as the “ejaculation” will be washed away when I shower.

I also learnt that listening to music via earphones as opposed to via speakers greatly enhanced my sensory experience and improved the quality and quantity of my orgasms. I had a couple of songs that I would wank to but my all-time favourite was Pombe Sigara by Nviiri, partly because I had such a huge crush on Nviiri and would halla at him on Twitter and Instagram all the time. Lol. And also partly because Pombe Sigara is just such a sexy song and Nviiri’s voice is hella seductive and arousing. As Robertta Bobbie said: 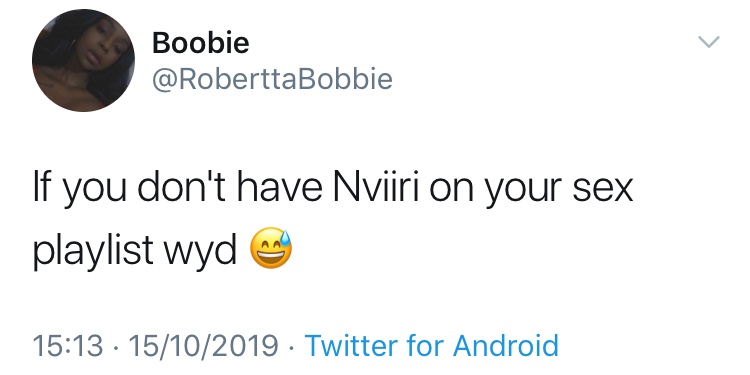 I was immediately intrigued…

Last year on November 10th Robertta introduced me to Nviiri when he was hosting brunch at Milan. 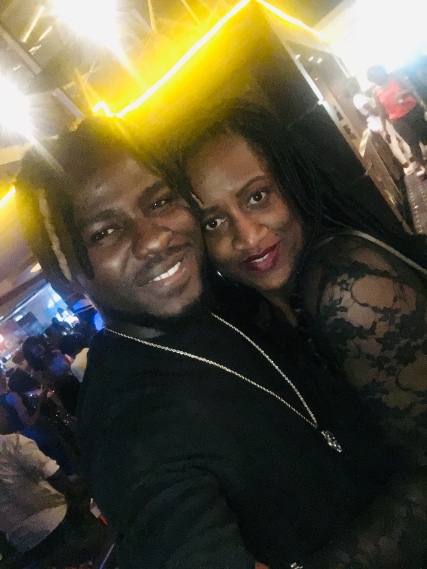 I let him know that Pombe Sigara is my favourite song to wank to and I also told him some other stuff that I will not share here, just know that he gave me his number at the end of the conversation.

As I conclude, I would like to know how many of you reading this are down to wank. Do you use your fingers, sex toys or a combination of both? I know someone who is able to bring herself to orgasm with her fingers in five minutes (lucky bitch!), so she wanks every day when she wakes up and at night before she goes to sleep. My fingers could never aki.

Leave a Reply to Anonymous A Cancel reply